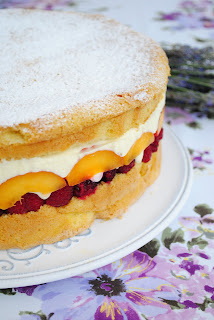 July 2011 Daring Bakers Challenge was hosted by Jana of Cherry Tea Cakes. Jana challenge everyone to make Fresh Fraisers inspired by recipues written by Elisabeth M. Prueitt and Chad Robertson in the beautiful cookbook Tatine.
I thought this would be just another fruit cake, but boy was I wrong. Fraiser turned out to be absolutely delicous and I will deffinitivelly make it again. Her s the recipie.

Preheat the oven to moderate 160°C. Line the bottom of an 20 cm spring form pan with parchment paper. Do not grease the sides of the pan. In a large mixing bowl, stir together the flour and baking powder. Add in all but 3 tablespoons  of sugar, and all of the salt. Stir to combine. In a small bowl combine the oil, egg yolks, water, vanilla and lemon zest. Whisk thoroughly.  Combine with the dry ingredients and mix thoroughly for about one minute, or until very smooth. Put the egg whites into a stand mixer, and beat on medium speed using a whisk attachment on a medium speed, until frothy. Add cream of tartar and beat on a medium speed until the whites hold soft peaks. Slowly add the remaining sugar and beat on a medium-high speed until the whites hold firm and form shiny peaks. Using a grease free rubber spatula, scoop about ⅓ of the whites into the yolk mixture and fold in gently. Gently fold in the remaining whites just until combined. Pour the batter into the prepared pan. Bake for 45 to 55 minutes or until toothpick inserted into the center comes out clean. Removed the cake from the oven and allow to cool in the pan on a wire rack. To unmold, run a knife around the sides to loosen the cake from the pan and remove the spring form sides. Invert the cake and peel off the parchment paper.

Pour the milk, vanilla, and salt into a heavy sauce pan. Place over medium-high heat and scald, bringing it to a near boiling point. Stir occasionally. Meanwhile, in a stand mixer add the cornstarch and sugar. Whisk to combine.Add the eggs to the sugar and cornstarch and whisk until smooth. When the milk is ready, gently and slowly while the stand mixer is whisking, pour the heated milk down the side of the bowl into the egg mixture. Pour the mixture back into the warm pot and continue to cook over a medium heat until the custard is thick, just about to boil and coats the back of a spoon. Remove from heat and pass through a fine mesh sieve into a large mixing bowl. Allow to cool for ten minutes stirring occasionally.
Cut the butter into four pieces and whisk into the pastry cream a piece at a time until smooth. Cover the cream with plastic wrap, pressing the plastic wrap onto the top of the cream to prevent a skin from forming. Chill in the refrigerator. In a small dish, sprinkle the gelatin over the water and let stand for a few minutes to soften. Put 55 mm of water into a small sauce pan and bring to a simmer over a medium heat.  Measure 60 ml of the chilled pastry cream into a small stainless steel bowl that will sit across the sauce pan with the simmering water, without touching the water. Heat the cream until it is 48.8 . Add the gelatin and whisk until smooth. Remove from the water bath, and whisk the remaining cold pastry cream in to incorporate in two batches. In a stand mixer, fitted with the whisk attachment, whip the cream until it holds medium-stiff peaks. Immediately fold the whipped cream into the pastry cream with a rubber spatula.

Combine the water and sugar in a medium saucepan.  Bring the mixture to a boil and let the sugar dissolve. Stirring is not necessary, but will not harm the syrup. Remove the syrup from the heat and cool slightly.

Line the sides of a 25 cm spring form pan with plastic wrap.Cut the cake in half horizontally to form two layers. Fit the bottom layer into the prepared spring form pan. Moisten the layer evenly with the simple syrup. When the cake has absorbed enough syrup to resemble a squishy sponge, you have enough. Hull and slice in half enough fruits to arrange around the sides of the cake pan.Pipe cream in-between strawberries and a thin layer across the top of the cake. Hull and quarter your remaining fruit and place them in the middle of the cake. Cover the fruit and entirely with the all of the pastry cream. Place the second cake layer on top and moisten with the simple syrup. Cover with plastic wrap and refrigerate for at least 4 hours. To serve release the sides of the spring form pan and peel away the plastic wrap. Serve immediately sprinkled with confectionars sugar. 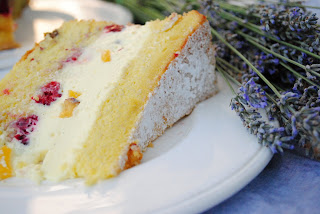 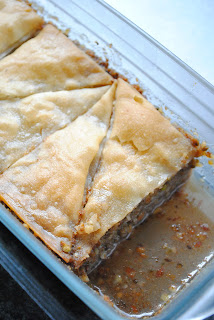 June 2011 Daring Bakers Challenge was hosted by Erica from Erica Edibles. Erika chose to challenge everyone to make hommemade phyllo dough and than to use that homemade dough to make baklava.
I know I am really latte with this month post but I chooser to do soo on purpose. Ihad planed trip to Istambul so it seemed that it would be nice to tell you about my impressions of Istambul along with baklava recipe.
I really liked Istambul but I was there too short to really get to know the city. It is a huge city situated on two continents; Europe and Asia devided by Bosphorus. I was there on buissness trip so I just had time to see essential; Hagia Sophia, Galata tower, Blue Mosque, Topkapi Palace, Bosphorus Bridge and ofcourse Grand bazar. I will definitely go back to get to know the city better. In the meanwhile I leave you with soma pictures of Istambul and baklava recipe. 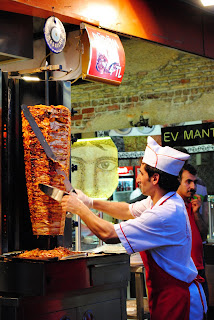 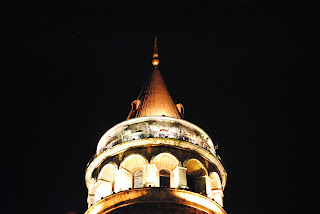 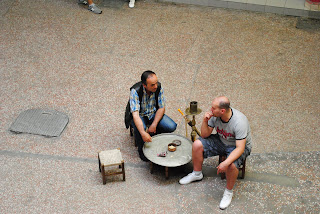 Waiting on custumers on Leather Bazaar 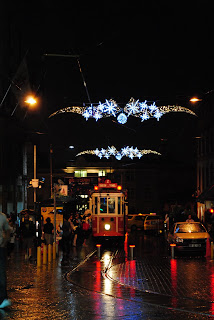 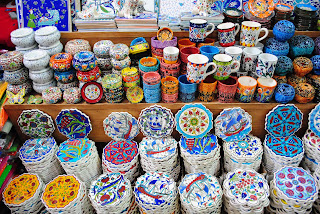 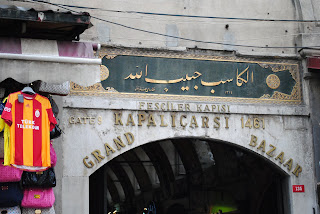 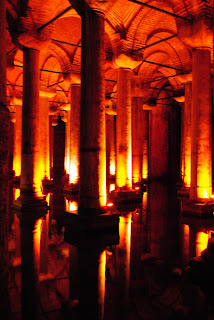 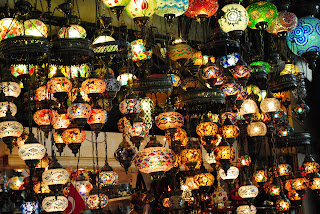 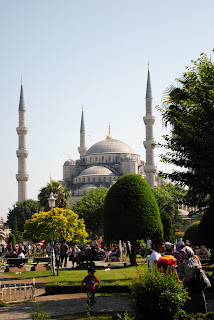 In the bowl of your stand mixer combine flour and salt. Mix with paddle attachment. Combine water, oil and vinegar in a small bowl. Add water & oil mixture with mixer on low speed, mix until you get a soft dough, if it appears dry add a little more water.Change to the dough hook and let knead approximately 10 minutes. You will end up with beautiful smooth dough. If you are kneading by hand, knead approx. 20 minutes.  Remove the dough from mixer and continue to knead for 2 more minutes. Pick up the dough and through it down hard on the counter a few times during the kneading process. Shape the dough into a ball and lightly cover with oil.Wrap tightly in plastic wrap and let rest 30-90 minutes, longer the better.

Unwrap your dough and cut off a chunk slightly larger then a golf ball. While you are rolling be sure to keep the other dough covered so it doesn’t dry out.  Be sure to flour your hands, rolling pin and counter. As you roll you will need to keep adding, don’t worry, you can’t over-flour.
Roll out the dough a bit to flatten it out.Wrap the dough around your rolling pin/dowel.Roll back and forth quickly with the dough remaining on the dowel.Rotate and repeat until it is as thin as you can it. Don’t worry if you get rips in the dough, as long as you have one perfect one for the top you will never notice. When you get it as thin as you can with the rolling pin, carefully pick it up with well floured hands and stretch it on the backs of your hands as you would a pizza dough, just helps make it that much thinner. Roll out your dough until it is transparent. NOTE: you will not get it as thin as the frozen phyllo dough you purchase at the store, it is made by machine Set aside on a well-floured surface. Repeat the process until your dough is used up. Between each sheet again flower well. You will not need to cover your dough with a wet cloth, as you do with boxed dough, it is moist enough that it will not try out.

Ingredients for the syrup:

300 ml honey
300 ml water
280 g sugar
1 cinnamon stick
1 piece fresh lime peel
juice of 1 lime
When you put your baklava in the oven start making your syrup. When you combine the two, one of them needs to be hot, I find it better when the baklava is hot and the syrup has cooled. Combine all ingredients in a medium pot over medium high heat. Stir occasionally until sugar has dissolved Boil for 10 minutes, stir occasionally. Once boiled for 10 minutes remove from heat and strain cinnamon stick and lemon, allow to cool as baklava cooks.

Ingredients for the filling:

Preheat oven to 180°C. Combine nuts, sugar and spices in a food processor and pulse on high until finely chopped. If you do not have a food processor chop with a sharp knife as fine as you can. Set aside.Trim your phyllo sheets to fit in your pan.Brush bottom of pan with butter and place first phyllo sheet.Brush the first phyllo sheet with butter and repeat approximately 5 times ending with butter. Sprinkle 1/3 of the nut mixture on top.Continue layering phyllo and buttering repeating 4 times.Sprinkle 1/3 of the nut mixture on top.Continue layering phyllo and buttering repeating 4 times. Sprinkle 1/3 of the nut mixture on top.Continue layering and buttering phyllo 5 more times. On the top layer, make sure you have a piece of phyllo with no holes if possible, just looks better.
Once you have applied the top layer tuck in all the edges to give a nice appearance.  With a sharp knife cut your baklava in desired shapes and number of pieces. If you can't cut all the ways through don’t worry you will cut again later.Then brush with a generous layer of butter making sure to cover every area and edge.Bake for approximately 30 minutes; remove from oven and cut again this time all the way through. Continue baking for another 30 minutes. 15. When baklava is cooked remove from oven and pour the cooled (it will still be warmish) syrup evenly over the top, taking care to cover all surfaces when pouring. It looks like it is a lot but over night the syrup will soak into the baklava creating a beautifully sweet and wonderfully textured baklava! Allow to cool to room
temperature. Once cooled cover and store at room temperature. Allow the baklava to sit overnight to absorb the syrup. Serve at room temperature. 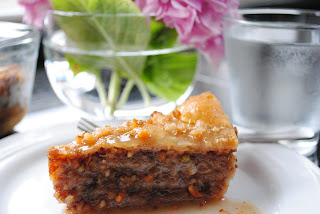