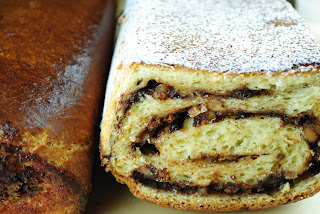 The March 2011 Daring Bakers Challenge was hosted by Ria of Ria s Collection and Jamie of Life s a Feast. Ria and Jamie challenged The Daring Bakers to bake a yested Meringue Coffee Cake.
we were presented with two variations of this delicous coffeecake. Jamie s All-American version with  cinnamon, chopped pecans and chocolate chips or chopped chocolate and Ria s Indian-inspired version version with saffron added to sweet yeast bread dough and garam masala and chashews flavoring the filling.
I decided  to keep it simple this month so I filled mine cake with walnuts and chopped chocolate. I would very much like to fill the cake with pecans but finding pecans in Croatia is almost mission impossible. Last time I had pecans in my kitchen was some two and half  years ago when I came back from Ireland and brought them from there.We were in Tesco doing some food shopping for breakfast and I seen pecans looking back at me. I was the happiest person on earth. My boyfriend an my best friend thought I went of off my mind how happy I was. Pecans were the best souvenir ever.
This time I used walnuts and they worked great.

For the yeast coffee cake dough:

Prepare the dough. In a large mixing bowl combine 230 g of the flour, sugar, salt and yeast. In a saucepan combine milk, water and butter and heat over medium heat until warm and the butter is melted. With an electric mixer on low speed, gradually add the warm liquid to the flour and yeast mixture,  beating until well blended. Increase mixer speed to medium and beat 2 minutes. Add the eggs and 150 g flour and beat for 2 more minutes. Using a wooden spoon stir in enough of the remaining flour to make a dough that holds together. Turn out onto a floured surface and knead the dough for 8 to 10 minutes until the dough is soft, smooth and elastic, keeping the work surface floured and adding extra flour as needed. Place the dough in a lightly greased bowl, turning to coat all sides. Cover the bowl with plastic wrap and a kitchen towel and let rise until double in bulk, 45-60 minutes.
Prepare your filling. In a small bowl, combine the cinnamon and sugar for the filling. You can add the chopped nuts to this if you like, but I find it easier to sprinkle on both the nuts and the chocolate separately.
Once the dough has doubled, make the meringue. In a clean mixing bowl beat the egg whites with the salt, first on low speed for 30 seconds, then increase to high and continue beating until foamy an opaque. Add the vanilla then start adding the 1/2 cup sugar, a tablespoon at a time as you beat, until very stiff, glossy peaks form.
Assemble the coffee cakes. Punch down the dough and divide in half. On a lightly floured surface, working one piece of the dough at the time.Roll out the dough into 20 cm x 30 cm rectangle. Spread half of the meringue evenly over the rectangle up to about 3/4 cm from the edges. Sprinkle half of your filling evenly over the meringue. Now, roll up the dough jellyroll style. Pinch the seam closed to seal. Very carefully transfer the filled log to mold seam side down. Repeat with remaining dough, meringue and fillings. Cover the two coffee cakes with plastic wrap and allow them to rise again for 45 to 60 minutes. Preheat oven to 180 C.
Brush the tops of the coffee cakes with the egg wash. Make in the preheated oven for 25-30 minutes until risen and golden brown. The dough should sound hollow when tapped.
Remove from oven and out of the mold. Allow to cool.
Just before serving, dust the top of the cake with confectioner s sugar and cocoa powder. 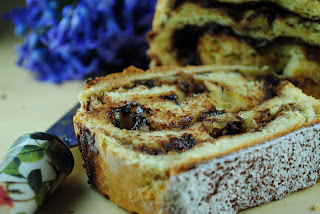